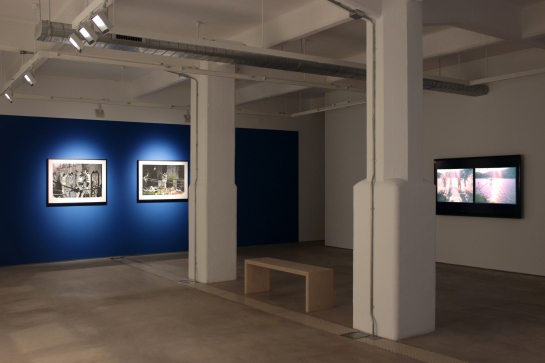 Courtesy of the Artist and Hales Gallery, London. © Carolee Schneemann

The positioning of Hales gives a sense of entering a very private and privileged space; the small unobtrusive entrance and long white hallway tucks the gallery somewhere at the rear of the Tea building. The polite overseer, who opens the interior door, welcomes and discreetly slips away. It is a delight to be alone, disconnected from the outside world, concerned only with the eighteen works of what is incredulously Carolee Schneemann’s first solo show in London. ‘Water Light / Water Needle’ is a collection of, essentially, archival pieces some of which have undergone a form of recent transformation.

The title of the exhibition refers to the 1966 kinetic theatre performance at St.Mark’s Church, New York, which was repeated and filmed in the same year on the Havemeyer Estate, Mahwah, New Jersey. In this revisit, based around a new edit of the film Water Light/Water Needle (Lake Mahwah, NJ),1966, the artist has put a matured hand to important works less remembered. The video, shown in diptych on a large LCD screen, plays in a continual loop. Shot on 16mm film, it amplifies the nostalgic quality that permeates the show betraying the free-living free-loving ideals of a post-war counter-culture.

Though spliced, the effect of the images playing simultaneously is one of dream-like weightlessness, aided by the soothing voice over. The overlaying soundtrack anchors back to the original performance, with fragments of Bach-Vivaldi in A minor echoed in the background of the Church, sounds of moving ‘clouds’ on pullies and bodies shifting over taught ropes. On one screen, eight naked performers run into a light-filled lake, splashing, grouping, huddling together. They disband and rush back out of the fresh sparkling water without abandon toward the camera, sunlight dappling their bodies from behind. On the neighbouring sequence are images of pine trees, thick ropes stretched between them, connecting the trunks.

The performers, now clothed, suspend themselves on the ropes; navigating their way, clinging, holding until one comes upon another where they then stay in embrace, connected to each other for a time before moving on. At times, they seem to exist elsewhere, without a plane before returning with an absorbing orgiastic connection between the self, the group and the environment. It is a beautifully choreographed performance, ethereal and graceful in stark contrast to the bawdy romp of Meat Joy,1964, for which the artist is most noted for. Interestingly it was after the success of Meat Joy that Schneemann was invited to Venice where she conceived the idea for Water Light / Water Needle, with a vision for the piece to be realised in the ancient aquatic city.

Watercolour diagrams, that were the first forms born out of the idea, are on show here along with photographic prints from the St. Mark’s Church performance. A gelatine silver print  Water Light / Water Needle, 1966, exemplifies Schneemann’s Body Art; naked, she reclines alongside a tree trunk, her head and shoulders lifting as though turning to look back out of the picture with her gaze aimed somewhere out of the frame and past the viewer, in denial of his existence. Her body becomes a motif, reflected in the water beside her and projected above. While earthy, it retains the airy weightlessness of the film.

This carefully orchestrated exhibition is steered away from retrospective by works dating 1966-2014 such as Water Light / Water Needle II. It cannot be denied that these ‘new paintings’, which are large black and white photographs of the first performance in St.Marks Church enhanced with the fresh marks of acrylic paint, are questionable. The film, photographs and drawings are from the 1960’s, they are products of their time, and honestly so. So why stretch this body of work through to 2014? The answer may lie somewhere between the experimental and the practical.

In the same way that Schneemann historically owned her gender, sexuality, and artistic integrity in an era dominated by a chauvinistic ideology, here the artist takes control of the archive in a way that recontextualises the material; re-working the photographic document with paint, showing the original drawings alongside the re-edited film and representing the works as a contemporary whole. A move, perhaps, that serves to separate her oeuvre from the art-market-money-spinning of the document, such is the legacy of the performances by the late Ana Mendieta, and gives intention to each piece to qualify its status as a work of art. That said, it is clearly as much about representing the original conceived idea in its many forms. Once again, Carolee Schneemann intelligently explores the possibilities of mixed media and this exhibition reasserts her position as a pioneer of the expanded field of art and commands the attention of a new generation.